St Michael’s is an Anglican parish church in Lilleshall. Our ancient building is warm, well-loved and much used week by week. It is versatile, providing a dignified venue for a traditional wedding or funeral service, a comfortable place where children feel at home and a place where people can sit and enjoy a meal at the Thursday Music, Lunch and Worship or at an Alpha Course.

It is our prayer that through all the events and activities that happen in this wonderful ancient building, people of all ages will encounter the risen Christ.

The village of Lilleshall dates back to Saxon times. Tradition has it that the name comes from “Lilla’s Hill”, named after Lilla who was a devoted servant of Edwin, King of Northumbria. It is thought that in AD 670, while on one of his missionary journeys, St Chad (who was to become the very first Bishop of Lichfield) came to Lilla’s Hill and told those who lived here the Good News about Jesus Christ. Those who became Christians as a result built a place in which to worship. This original church was a small Saxon building on the site of the present-day building.

The present church building was originally built in about 1200 and dedicated to St Michael and All Angels. Parts of the nave are late Norman, the chancel Early English and the north aisle was added in about 1300. The tub-shaped font is Norman and may be as early as 900. According to tradition it came from the nearby Lilleshall Abbey.

A major restoration was carried out in 1856 when the appearance of the building must have changed quite dramatically. Galleries and two dormer windows were removed and the font was put in its present position. The extensive work meant that the building had to be closed for worship for a few months. A plaque on the north wall commemorates the reopening of the restored and re-ordered building. 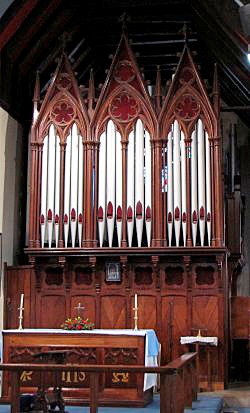 The Church has a fine two-manual organ which was installed in 1891. It was completely rebuilt in 1960. Major work was undertaken in 2003 which included the fitting of a new blower and electric action to the pedal board. 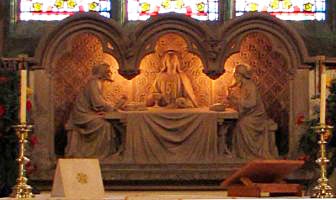 The splendid reredos was a gift of the Duchess of Sutherland and was introduced into the church when it was re-ordered and restored in 1856. It is a sculpture in a single piece of stone of Jesus at table in the village of Emmaus on the evening of the first Easter Day in Emmaus. He has just walked the seven mile journey from Jerusalem with Cleopas and his friend though they had not recognised who he was! In this superb piece of carving, the sculptor (John Farmer of London) captures the moment when the two disciples recognised Jesus, as Luke records in the final chapter of his Gospel.